Peter loved working with his animals, the 4-H group, and at local fairs.

A celebration of his life will be held at a future date yet to be determined.

The family appreciates the care he was given at the Barrie Memorial Hospital in Ormstown, and at the Royal Victoria Hospital in Montreal.

Beloved son of Mary Margaret (O’Handley) and Josef Andert, Peter grew up on the family farm on Norton Creek in Ste-Clothilde. His Irish-Canadian and German cultural backgrounds contributed to his strong work ethic. He was a regular kid, but often got into mischief, either as chief instigator or the ‘egger-onner’.

Peter never wanted to be defined by health issues, but there is no doubt that these shaped his life. When Peter was 14, he was diagnosed with Type 1 Diabetes. Quickly Peter and his parents became experts about diabetes. He really enjoyed summer camps geared to having fun and learning with diabetic peers. Peter took this first major hurdle in stride and went through his teenage and college years enjoying many sports and getting very involved in the 4-H. 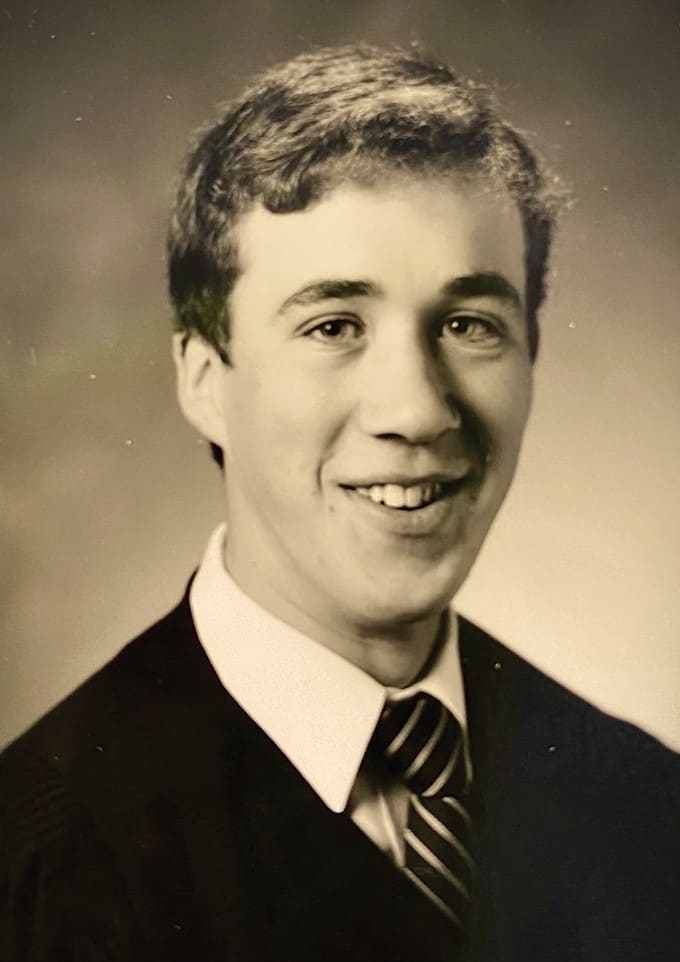 He was no angel though, and his mischievous ways continued to get him and his friends into hot water. From his ‘jet fuel’ concoctions of cider and other things; late night capers like walking into a billet parent’s bedroom, mistaking it for a cupboard; and notorious week-ends known to be ‘scantless’, he got both men and women in ‘light’ trouble with their families and spouses. He kept them out too late, or too long, or up to no good – and this one is particularly precious – as a best man, he invited the groom outside for a pre-dance drink and made him miss his first dance with his bride. All who spent time with Peter throughout the years will have many funny stories to share once we can gather.

He was a fantastic story teller, gifted with language and quick on his feet. He could beat almost everyone at Trivial Pursuit and was very proud to be a part of ‘The Dumb +*^#%@+! Gang’. You can only belong to that if you can hold your own throwing around witty one-liners, lightning-fast comebacks and a measure of dark humour. Peter provided a lot of people with comic relief. A number of you have said that you have no one else to laugh yourselves silly with, or to bust a gut with, like you could with Peter.

Peter’s early working years included jobs at regional agri-food companies and he also developed a solid reputation across the valley as a conscientious and reliable man for relief milking.  Peter could also be stubborn and tough headed. Nothing easily swayed or intimidated him!

In case you think he was all tom foolery and toughness, Peter was beloved by his friends, men and women, young and old. He always made time for a friend in need. “I couldn’t have asked for a better friend”, is something that has been said frequently these past few weeks. It is surprising just how many people Peter got close to, on a deep personal basis. Loyal to a fault, discreet and a great listener, he was a real good guy. He really enjoyed small gatherings and had a very wide range of close friendships. Quite a few of you considered Peter your best friend.

He always seemed to seek out eclectic people and appreciated diverse opinions. He did the same with his animal kingdom and was interested in domestic and wild animals and rare and heritage breeds. Peter had a kind soul and truly loved all creatures, great and small. He appreciated their companionship, surrounding himself at times by a whole menagerie. Combined with his whimsical nature, funny things often ensued… like the day he went to auction for a piece of furniture and came back with Larry the llama!

Peter was a big Bruins and music fan and saw the Rolling Stones a half dozen times. He was known to be generous to friends with hockey and concert tickets. His early years in the 4-H fostered a strong sense of civic duty; he continued to volunteer with them as well as various fair boards and committees.

Peter, was also a very private person in some regards. Few knew how many serious health challenges he went through. They involved two pancreases and four kidneys. Only a few understood what a courageous and dignified survivor he was, having faced death and extensive hospitalizations several times. He bore more than most of us could imagine. And yet, he still joked and pranked with the doctors and nurses, and hospital staff, even in the toughest days. Always looking on the bright side, he even found the joy in hospital gravy, claiming it was one of the most delicious things in the world!

To all the people that supported Peter throughout those years and who were often at his side: the medical team at the Royal Vic, his loyal friends and ’brothers’, parents and family and his long-term partner at the time – you deserve thanks and so much respect. You helped carry those heavy burdens.

Peter had some great times in his last few years – working at the fairgrounds and on building projects with friends, boating and kayaking the Great Lakes and holidays away – but what most characterizes this time is the amount of meaningful conversations he had with his wide range of friends, and loved ones. You may now only realize how precious these times were and how much they meant to him. They made his life full.

His health took a slow turn these past few months and as Mick Jagger wrote, we “could not foresee this thing happening to you”. Although Peter had had many second chances at life, it still feels like a life was robbed way too young. Peter was not afraid of death, he woke up every day, happy to see another sunrise and lived life in the moment. He lived life on his terms. He left on his terms.

He passed away in the company of his loving partner, peaceful and having no doubt how much he was loved by all of his friends and family. He was more ready to cross over than any of us were to lose him.

When the time comes and we can all gather safely again, celebrations of life, Peter-style, will be determined with family and his circle of friends.

Gymkhana is an equestrian event consisting of speed pattern racing and timed games for riders on horses.

These events often emphasize children's participation and may be organized by a recognized Contry Fairs ,Pony Club or a 4-H club.

Mark your calendars for September 14. Havelock Fair is celebrating its 148th year, making it one of the oldest consecutively held fairs in Canada.

First held in 1871, the fair grew out of the pride over what local farmers and their households produced, and it still holds close to its roots of showcasing rural agricultural life. It draws locals, those from neighbouring communities, and people from larger urban centres whose ancestors may have lived a way of life that the fair is a reminder of.

Here are some of the main events for this year’s fair:

The Elgin & District Pipes and Drums will perform at 11 a.m., walking the grounds to officially open the fair.

A barbecue chicken lunch ($15) will be served by the Women’s Auxiliary of the Barrie Memorial Hospital.

Robert Craig & Rocky Top will headline the live music show and are sure to get all ages up dancing.

The activities for families include game, face painting, the bouncy castle, a petting zoo, children’s races and games, and a magician.

The ever-popular gymkhana, a big draw for novice and seasoned riders alike, and the 4-H youth are mainstays of the fair.

Interest in heritage and rare animal

breeds is on the rise so a section of the grounds has been dedicated to showing them. A sheep-herding demonstration is in the works and Massey and Fergie, Quinn Farm’s pair of oxen, are coming.

Aside from all this and more, there are the wonderful exhibits of traditional arts and crafts, plants and flowers, fruits and vegetables, homemade produce, and forage crops. Why not enter something? It takes a community participating to make a fair great.

Gretta and Ross Whyte have been a big part of the fair for decades. Ross has been a director for more than 60 years. They see the fair as “keeping alive what built this community” — hard work and a love of the land. As a six-year-old, Ross went to the fair in a horse and buggy and the cattle were driven, not transported in trucks.

Prior to 1958 the fair was held on a Wednesday, so schools were closed for the day. Gretta reminisced that showing your home and garden produce “became an incentive to get better,” and remembers that it was a time when Roma families came in their wagons selling pots and pans.

As a country fair that has seen many changes over almost 150 years, the Havelock event remains grounded in promoting rural agricultural awareness and its many inherent traditions. Throughout the years the fair has remained a community event worth celebrating. As a family day, a social time, fun and educational, it puts us in contact with the heart of rural life and its people. You are invited to come and keep this spirit alive.

the Havelock Fair will celebrate its 148th consecutive fair. What an amazing tradition! Situated at the base of beautiful Covey Hill in the southwestern corner of Quebec this is a family day not to be missed.